Every SECOND, of every MINUTE, of every DAY someone somewhere is using a Light for the Lost evangelism resource! Amazing. On this page are several stories that exemplify how Jesus uses LFTL to reach people and change their lives forever. LFTL helps provide missionaries and missionary partners with evangelism resources in five platforms: print, audio, video, internet, and technologies. All over the world people are learning about Jesus Christ because of LFTL resources.

There are so many amazing stories to share. These are some of our favorites. To see some incredible video presentations of stories like these click here. To read more amazing LFTL stories, check out our 360 Spotlight newsletter archive here.

FROM IDOL WORSHIPER TO EVANGELIST

Pastor Jean-Baptiste is from a place called Bilanga on the edge of the Saharan Desert in Burkina Faso. His story is powerful, and Light for the Lost now plays a role in his ministry. Jean-Baptiste was raised in a traditional animistic village. He worshipped idols and gods of nature. Dissatisfied with these gods, one day he created his own god. He dug a well with his own hands and gave a name to “the god of the well.” He prayed every day to this god to protect him from sickness and evil.

But one day, Jean-Baptiste became deathly ill. He lay in his hut with high fever and felt his life slipping away. As he slept Jean-Baptiste heard a name in his mind: Jesus! He woke up. The fever and pain were gone. He was healed! A man stood over Jean-Baptiste, praying in the name of Jesus. It was an evangelist who had come to share the gospel in the village. Jean-Baptiste was the first person there to believe in Jesus.

When these photos were taken, Jean-Baptiste was studying evangelism ministry with materials provided by Light for the Lost funds. Jean-Baptiste was asked how they were helping him. “These tools are helping me learn the words of Jesus to go to every place and preach,” Jean-Baptiste said. “Out here many villages have no knowledge of Jesus. They worship demons. God wants me to go preach in these villages.” LFTL is thrilled to help resource missionaries and pastors like Jean-Baptiste all over the continent of Africa with evangelism tools to share the gospel using every language and means necessary.

PHOTO: Pastor Jean-Baptiste and his family.

Since launching On The Red Box in Madrid, Spain, 16 years ago, missionary Jacob Bock and his team have distributed more than two million gospel tracts and scripture portions!

Light for the Lost funds printed ALL of these evangelism resources. “We love the support we get from LFTL,” Bock says. “We have been in Spain 31 years and the gospel has been given to people from all over the world. Thanks for your investment!”

Jacob shared this testimony with LFTL.

“A Mexican girl was visiting Madrid on vacation. She walked through the main square, Puerta del Sol, where we were preaching. On her way through, she ended up with five different tracts. She stuffed them in her purse and read them on the plane back to Mexico. In the process, God did a work in her life and she came to faith in Christ!

“She found a church in her neighborhood and started attending. We learned her story from someone in that church.”

For years, friends of LFTL have given generously so the gospel could be given to people like that young Mexican woman. On behalf of millions like her, we say thank you!

FIREBIBLES IN DOZENS OF LANGUAGES

On the outskirts of a major city in Myanmar is a humble home near a rice field. Twice per week that home transforms into an Assemblies of God church! About 30 people from various ethnic backgrounds (Burmese, Karen, and Lisu) gather to learn about Jesus. Their pastor is a man named Maung. Every Sunday he goes forward, places his Burmese language FireBible on the makeshift podium and invites people to come forward and share a testimony, prayer request, or read a favorite scripture from the Bible.

One Sunday morning in particular a 13-year-old Lisu refugee boy named Jun went forward and testified about the goodness of God. He read his favorite passage from Psalms in the Burmese language and then led the church in a song. Next, an 82-y

ear-old Karen woman named Esther went forward and read from the New Testament. Then she sang a hymn in her mother tongue, Karen. Though few could understand Esther, the entire congregation rose to worship Jesus with her. Finally, a Burmese woman named Hla stood at the podium. She read the story of Elizabeth and Zechariah in Luke chapter 1. She spoke about how God miraculously gave her children, even though she thought she could not bear children before. She compared her joy to that of Elizabeth and Mary in Luke 1:39-56.

All three of these people were from different ethnic backgrounds, yet they had something beautiful in common—their love for God’s Word. The Burmese language FireBible these people study, read, and receive teaching from Pastor Maung was provided by Light for the Lost funds! Whoever gave the funds to provide that particular Bible for that church in Myanmar got their money’s worth! 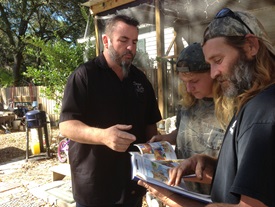 In the Ocala National Forest in Central Florida you will find isolated, impoverished communities that are virtually “off the grid.” Many of the homes don’t have electricity or running water. An income of $12,000 per year is considered wealthy. Generational poverty and prolific home-made drug use has destroyed hundreds of homes and families. 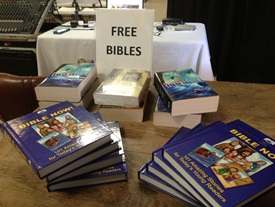 In the midst of this spiritually-needy cluster of communities are U.S. Missionaries David and Tammy Houck. Over the years, Light for the Lost has provided funds for the Houcks to purchase Children’s Bibles. These Bibles use simple language, large print, and colorful illustrations to communicate the gospel and biblical truths. Surprisingly, these simple Children’s Bibles are a huge hit! Hundreds of the Children’s Bibles have been distributed over the years and virtually every person in Houck’s church (comprised mostly of first-generation believers) has one.

Light for the Lost partners with missionaries like the Houcks across the U.S. to provide evangelism tools in five platforms: print, audio, video, internet, and technologies. We’re grateful to everyone who gives and prays so that we can help reach spiritually-desperate parts of America with the gospel.

LATIN AMERICA AND THE CARIBBEAN

More than 4,000 Cuba Assemblies of God ministers are able to train for evangelism ministry thanks to a partnership between Light for the Lost and Global University. One of these ministers is named Cesar Suarez. He leads a growing church outside H

avana. Pastor Cesar has a very robust evangelism ministry through his church. To assist him are several important resources provided by Light for the Lost funds.

The Cuba Assemblies of God has a program and a process for having an evangelism contact (literally knocking on the door and speaking to someone) at EVERY personal residence in the country. They have already done it once and are canvassing all of Cuba again.

Many of the pastors and lay workers who are part of this ministry utilize resources provided by LFTL funds.

Every time you give, pray, or otherwise support LFTL you are enabling us to help share the gospel of Christ where His story has not been heard or received.

A secret movement of house churches has been building rapidly throughout the Middle East. It started in one area (which we cannot name), and has now spread to EVERY Muslim majority nation of earth! It is called the Upper Room Movement, due mainly to how its leaders identify with the early church in Acts 1-2. Literally tens of thousands of Upper Rooms have started. We can’t share the estimated numbers, identify the names of people involved, or even hint at key areas where the growth is greatest. 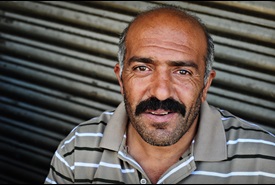 There have already been numerous leaders martyred for their faith in Christ. Muslim judges, Imams, soldiers, and sheiks are among those who have turned to faith in Christ. This is great news! But what about Bibles, discipleship materials, and raising up leaders?

This is where Light for the Lost comes in. LFTL is partnering with several missionaries and local workers to provide evangelism resources used to plant new Upper Rooms, as well as provide Bibles for Upper Room leaders to study and use in their teachings. Through LFTL literally hundreds of thousands of Muslims are learning about Jesus Christ and turning to Him. Praise God that we get to be part of things like the Upper Room Movement!

PHOTOS: Arabic-speaking believers (left) and a Muslim shopkeeper (right) in the Middle East.